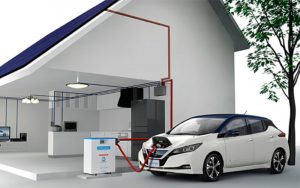 In a landmark move, Ontario’s largest utility and a Toronto-based AI company are collaborating to run a pilot program that will see up to 10 Nissan Leaf-owning households participate in a vehicle-to-home, bidirectional charging program
It’s contrary to everything known about car ownership to consider that, in the future, your electric vehicle may be a solid investment that generates returns for you.

But it’s exactly that paradigm shift that Peak Power, a Toronto-based software and artificial intelligence company dedicated to solving the problems facing the grid in an all-electrified society, wants you to imagine.

“We are trying to share this vision,” says Matthew Sachs, chief operating officer at Peak Power in an interview with Electric Autonomy Canada. “Governments don’t like subsidies, right? But if you say, ‘Instead of subsidies that you need to get you to buy an electric vehicle, I’m going to create a new industry that will allow you to get paid when you invest in electric vehicle,’ that’s a totally different story.”

And there begins the story of Peak Power’s latest venture: a potentially game-changing, total market disruption in the form of a vehicle-to-home pilot with Ontario’s largest utility, Hydro One, that aims to prove how battery storage at a micro level (cars and homes) can be harnessed to solve energy distribution at a macro level (local and regional grids).

“What we really want to do is to tap into the residential opportunity, because then you’re truly democratizing this concept of participating in energy markets,” summarizes Sachs.

The project is this: up to 10 Nissan Leaf-driving households will participate in a vehicle-to-home charging pilot, operating in either grid-connected or grid-outage modes. Peak will install software to demonstrate and study how an EV could be used to provide backup power to a home during an outage or to act as a virtual power plant to feed energy back into the home during times of peak grid demand. The pilot will run simulations to test the reliability, duration and efficiency of the vehicles under different conditions and gather data on the charging and discharging habits of the owners.

Peak Power is still finalizing the details of when the pilot will launch and how long it will run for. The next step is to put out a call out for participant households. Once those vehicles are identified and the infrastructure is installed the data collection can begin, with the ultimate goal to gather enough information to be able to model what benefits vehicle-to-home technology can bring to the grid at scale.

From there, is an array of choices about how to proceed.

The first and most obvious is to invest hundreds of millions of dollars into fortifying existing grid infrastructure: new transformers, new power plants and new substations. But this presents a devastating trickle-down effect where customers end up shouldering the cost of the updates in higher utility bills, which disincentivizes customer use, which leads to a drop in overall consumption that, in turn, triggers yet another price jump.

Essentially, door number one is a doomed chicken-and-egg scenario.

Next could be to do nothing and to let the situation unfold organically. Some neighbourhoods poorly serviced by transit or in the suburbs will require costly upgrades, others that are already heavily reliant on public transit will not. Likewise, some EV owners will take advantage of existing time-of-use rates and charge their vehicles accordingly, thus saving on their own bills, while others will not. The as-needed upgraded infrastructure costs would be spread out gradually across the total consumer base. A hands-off, free-market strategy is not a terrible option, but there is no doubt everyone will see some uptick in their monthly bill.

Finally there is the third strategy, which takes passive, EV-driving energy users and turns them into active market players that both use and generate value in the grid, are able to play the market to their advantage as they want and can be harnessed by grid operators to net maximum benefit to the infrastructure.

It’s not difficult to guess which option Peak Power is chasing.

“We know that people buy vehicles already for mobility services, but if they could be paid to use that vehicle as a grid resource, while they’re not using it, you’re lowering the overall cost of ownership and you’re accelerating the adoption of electric vehicles helping to move to this new paradigm.”

A free-market grid
It sounds very promising; an energy utopia where the grid sustains the people and the people help sustain the grid. But realizing all of Sach’s and Peak Power’s vision would mean the current system must be torn down and rebuilt.

Is that even possible?

“Currently, energy markets are very highly regulated. Basically, you have to be a utility —or very large energy user — to be able to participate,” says Sachs.

“But with new technologies and software, we can aggregate very small systems to participate in those same markets. We call that a virtual power plant.”

The term for what Sachs is talking about is a microgrid, which is a self-contained grouping of energy generating resources that operates to meet the needs of the specific geographic area, while also working in harmony with the larger macrogrid (a macrogrid is what most of Canada’s electricity networks are structured as, currently).

There are already a handful of microgrids in existence around the world on some military bases; and other public grids including Mpeketoni, Kenya; Kempele, Finland and several in Yemen. Canada even has a few renewable microgrids in operation in First Nation communities in the far north.

One of the quiet leaders in microgrids is the United States, with over 160 in operation. The U.S. government even studies the concept in a dedicated government department, and the Center for Climate and Energy Solutions says, “Microgrids provide less than 0.2 percent of U.S. electricity, but their capacity is expected to more than double in the next three years.”

Even though Canada has some precedent for microgrids, it doesn’t mean the path to establishing them is smooth, nor has it been tested in an urban setting — yet. This is where Peak’s vehicle-to-home pilot comes into play, both as a proof-of-engineering project and also as the first group to try and alter the stringent and robust regulations that govern the Ontario grid.

Hydro One’s role
In the world of policy, rules and regulations there can seem to be many problems and never enough solutions. Now, multiply that tenfold when you are one of the largest utilities in Canada facing a completely altered energy generating and consuming grid all coming at you in the next decade.

Welcome to the C-suite at Hydro One.

“The shift to electrification is one of the most significant technology and environmental transformations in recent history, and we are seeing it unfold in real time,” said Bruno Jesus, vice-president planning at Hydro One in an emailed statement to Electric Autonomy.

“Our partnership with Peak Power…will allow us to explore the possibilities of two-way Vehicle to Home (V2H) charging technology to improve power reliability and resiliency for customers. This pilot will allow both companies to determine how Distributed Energy Resources (DERs) can provide affordable solutions to restoring power quickly and safely, particularly to customers located in remote areas experiencing frequent power outages.”

With Hydro One’s nearly $7.3 billion in revenue in 2020, over $30 billion in total assets and 1.4 million customers covering 75 per cent of Ontario, to not meet the energy challenges of tomorrow isn’t an option.

That is, essentially, the argument Peak Power brought to the doorstep of Hydro One and the Independent Electricity System Operator (IESO) — the Crown corporation responsible for operating Ontario’s electricity market — when they were pitching their pilot.

“Technically, there’s no reason why not to allow everyone that has a home (or a small business) to have a home battery or an EV to participate in the grid,” says Sachs. “We’re doing these demonstration projects and working with the Independent Electric System Operator to change the rules of the game, to allow the aggregation of these micro assets to participate.”

Understandably, the negotiations with Hydro One and the IESO were lengthy and complex as issues about managing grid reliability, pricing and understanding the technology had to be examined. But, the potential benefits of the project were immediately obvious.

Back in 2006, the IESO established the Grid Innovation Fund in order to invest in projects that support the reliability and bottom-line of the grid. It was this branch that stepped in to support Peak’s pilot with $425,000 in funding.

“Peak Power’s vehicle to home project will demonstrate how EVs can provide back-up power to residential customers during outages, as well as evaluate the potential for EVs to inject extra power to support the grid, and provide an additional revenue stream for the car owner in return,” said the IESO in a press statement.

“With investments in innovative pilots like Peak Power’s vehicle to home project, electric vehicle owners can become active contributors to the affordability and reliability of the electricity system.”

Now that approvals are finally granted and the pilot program is able to actively recruit homes and vehicles to participate in the program, Ontario could be one step closer to finding a pathway to build a grid that more closely aligns with, supports and benefits from technology in the future.

“The regulations haven’t kept up with technology,” says Sachs.

“All of this remains to be seen and the rules are not there yet. So, this [pilot] is part of the technical demonstration of how we can participate. As much as I’m bullish on the technology, I recognize that there are steps that we have to do to get there. Reliability is number one, protecting customers is very important and we need to make sure safety of the grid is important. So we need to take all of these steps to make sure that we’re doing this the right way.”

More funding from the IESO
In addition to helping to finance Peak Power’s vehicle-to-home pilot, in the same announcement the IESO also committed to directing support from its Grid Innovation Fund into two other projects.

In a joint partnership between Survalent, Elexicon Energy, London Hydro, Waterloo North Hydro, and Oakville Hydro local level energy supply and consumption will be studied to give real-time detail to hydro companies about local energy sources. The IESO is supporting with $500,000 in funding.

And a simulating system designed in partnership with Powerconsumer Inc., Newmarket-Tay Power Distribution, Elexicon Energy and NODES-tech “will model how local distribution companies can operate dynamic local electricity markets, similar to the IESO wholesale market operating at the provincial-level.” The IESO will contribute $480,000 to that initiative.

Peak Power is changing how we look at EVs